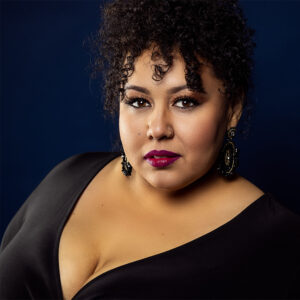 Born and raised in Peoria, Illinois, Brianna Thomas made her singing debut at the age of six with her father Charlie Thomas. By age 12 her talents and dedication propelled her to successes including guest performances at the Montreux, North Sea, and Umbria jazz festivals, as well as performances at venues ranging from the Bahamas to Geneva, Switzerland. In 1996, at age 13, she became the youngest person to be inducted into Peoria, Illinois’ African American Hall of Fame Museum. In 2001 and 2002 she was a resident in the Betty Carter Jazz Ahead Program at the Kennedy Center. In 2006 Thomas had her New York debut at Dizzy’s Club Coca-Cola during the Women in Jazz Festival. In 2007 she attended The New School for Jazz and Contemporary Music and in 2009 won the famed New York Jazzmobile Vocal Competition, judged by jazz icons Dr. Billy Taylor, Grady Tate, and Gloria Lynn. Since moving to New York, Thomas has performed in venues and festivals across the world, including the Sochi and St. Petersburg Jazz Festivals, the International Jazz Festival in Bern, Switzerland, the Savannah Music Festival in Savannah, Georgia, and Jazz at Lincoln Center Doha, Qatar, as well as concert halls and venues throughout Israel, Southeast Asia, and Europe. Since graduating college in 2011, Thomas has performed throughout New York City, including at Jazz at Lincoln Center, Carnegie Hall, Lincoln Center’s Midsummer Night Swing, the New York Botanical Gardens’ summer concert series, Jazzmobile Summer Stage, the New York Hot Jazz Festival, Charlie Parker Jazz Festival, Smoke Jazz Club, The Iridium, and 54 Below, Ginny’s supper Club – with her own band, The Brianna Thomas Band. Thomas has performed with artists such as world-renowned musician and composer Wycliffe Gordon, nine-time Grammy Award–winning per- former and educator Wynton Marsalis, the Jazz at Lincoln Center Orchestra, the Legendary Count Basie Orchestra, Dianne Reeves, Catherine Russell, Russell Malone, Marcus Printup, and Rock and Roll Icon Steve Miller. In 2014 Thomas released her debut album, You Must Believe in Love, and her sophomore release with the The Brianna Thomas Band is on the horizon.