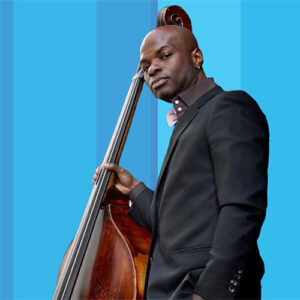 Music is the fulfillment of Richie’s destiny – it’s in his DNA. The youngest person ever inducted into the Pittsburgh Jazz Hall of Fame, bassist Richie Goods got an early start playing in church and clubs while still attending Pittsburgh Creative and Performing Arts High School. After graduating from the prestigious jazz program at Berklee College of Music, Richie moved to New York City, where he studied under jazz legends Ron Carter and Ray Brown. Richie credits jazz luminary Mulgrew Miller for helping him hone his jazz skills early in his career. Richie toured and recorded with Mulgrew for nine years. That opportunity brought Richie to the attention of many in the jazz community and afforded him the opportunity to record and tour with a variety of jazz and popular artists ranging from the Headhunters, Lenny White, Louis Hayes and the Cannonball Adderley Legacy Band, Milt Jackson, Russell Malone, Vincent Herring, the Manhattan Transfer and Walter Beasley to Brian McKnight, DJ Jazzy Jeff & the Fresh Prince, Whitney Houston and Christina Aguilera. Richie’s lengthy discography also includes Grammy award-winning and platinum albums of Alicia Keys and Common. Richie most recently toured with Grammy winning trumpeter, Chris Botti. When not on tour, he can be found in his Westchester, NY studio, producing records for his company, RichMan Music, Inc. His first solo project with his fusion/funk band, “Richie Goods and Nuclear Fusion, Live at the Zinc Bar” and his latest release, “Three Rivers” received critical acclaim. Richie is busier and more excited than ever, touring and working on a new recording which will feature more of his acoustic bass work. Look for it in 2018.