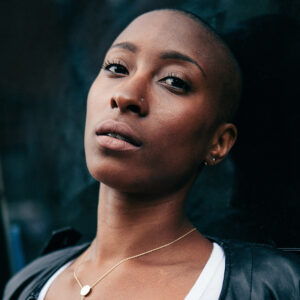 A celebrated soloist of Donald Byrd’s Spectrum Dance Theater for four seasons, Curtis is also the subject of an Emmy Award winning short film, Jade Solomon Curtis directed by, Ralph Bevins. 2017 began with Curtis being awarded SeattleDance’s first “Dance Crush Award” for Performance/Choreography in the riveting workshop of “Black Like Me”.

Curtis received her BFA in Dance Performance from Southern Methodist University and is the recipient of fellowships and grants from the University of South Carolina, Seattle Office of Arts & Culture, Artist Trust and 4Culture. Curtis is currently the Director of the Arts Program for the Pan African Center for Empowerment (PACE) and is an artist-in-residence at Velocity Dance Center.

While at Spectrum, Curtis toured Nepal, Bangladesh and Sri Lanka, as well as a United States National Tour. Since beginning her solo career in 2015, her solo performances have been commissioned by Seattle Art Museum, Central District Forum for Art & Ideas, Grammy Award winning jazz composer, John Clayton (NYC); and presented by the Seattle International Dance Festival, Velocity Dance Center and Spectrum Dance Theater. In 2016, Curtis was selected to tour Cuba as part of, Common Ground Music Project; and her solo, “Emancipation” was produced as part of the landmark exhibition, Kehinde Wiley: A New Republic.

A sought after teacher internationally, she teaches children through adult professionals in contemporary dance, ballet and creative dance processes; and was the Program Director of the Professional Division of the School at Spectrum Dance Theater.